The amount of data gathered is proportional to the size of the code base and can become pretty big in case of a large application analyzed. NDepend added value lies in its capabilities to let the user browse readily this huge amount of data. This way developers and architects can know precisely what’s really happening inside their shop and can take decisions based on real facts, not based on intuition and rumor.

There are 2 distinct scenarios to browse data:

Let's expose here some details about how to integrate NDepend into a build process and customize analysis. Let's first explain how NDepend can provide useful warnings about the health of a build process.

Warnings about the health of the build process

These warnings can be found: 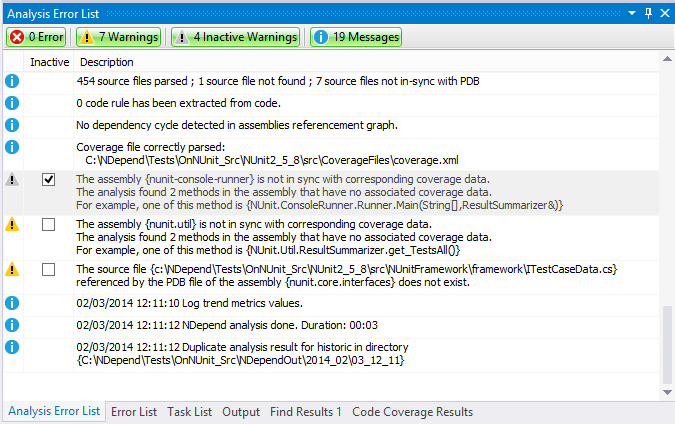 What we mean by the health of the build process is some details that can reveal potential flaws. Concretely this includes:

Assemblies versioning issues such as:

Assembly conflicts such as:

PDB files issues such as:

Coverage files issues such as:

In the Error List panel of the interactive UI you have the possibility to deactivate false warnings to avoid being warned again and again during future analysis.

Running an Analysis with NDepend.Console.exe

NDepend.Console.exe is a classic console executable that takes command line arguments. The only required input is an absolute path to the NDepend project file (extension .ndproj) that defines the code base to be analyzed. Several command line arguments can be provided and they are listed here: NDepend.Console.exe. Basically these arguments will let you override folders where assemblies to be analyzed are stored, override the output folder where data produced by the analysis will be persisted and provide a XSL sheet to customize the report.

A simple exec command is needed to integrate NDepend.Console.exe into your build process. More documentation is available concerning the integration of NDepend with different build technologies:

To handle real-world scenarios, there are several analysis options. Options can be tuned through the VisualNDepend or Visual Studio addin > Project Properties panel. Options are then persisted into the NDepend project file (extension .ndproj) and can be used at analysis time.

The tab Code to Analyze lets you choose the assemblies analyzed but also the directories that contains them. Analyzed assemblies include both your own assemblies, but also third-party assemblies that are used by your application (like mscorlib.dll or Log4Net.dll). 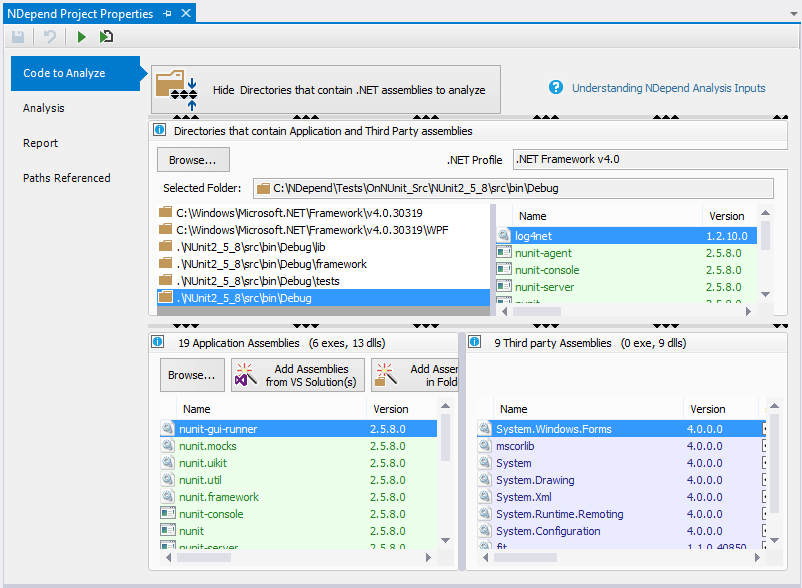 In the screenshot above you'll notice that directories containing .NET Framework assemblies are absolute. These directories are always absolute and NDepend automatically adapts folders path from the current machine's .NET Framework installation.

You'll notice also that directories that contains application assemblies are relative. The Project Properties tab Paths Referenced (below) lets choose how paths are stored and offer several options to redirect paths. This is useful when the same project file is used in different context on different machine. Each path can be: 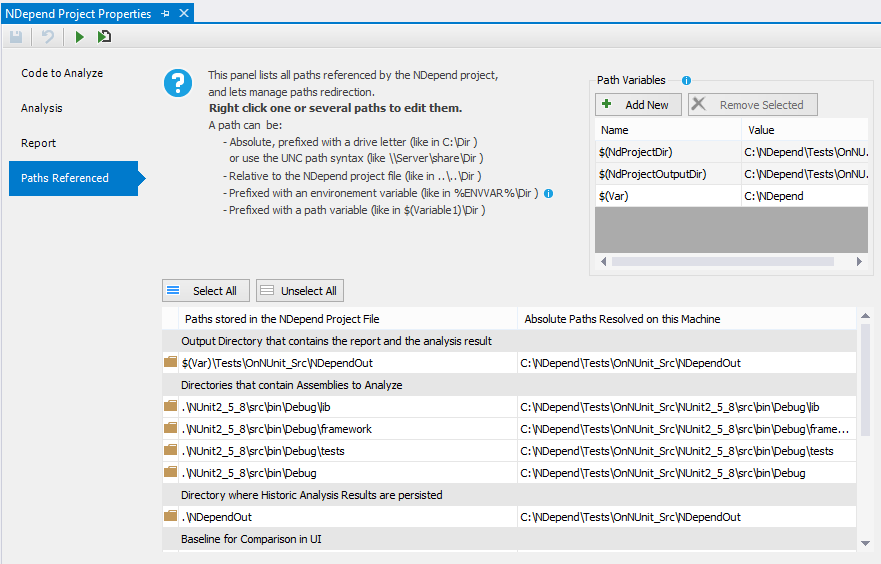 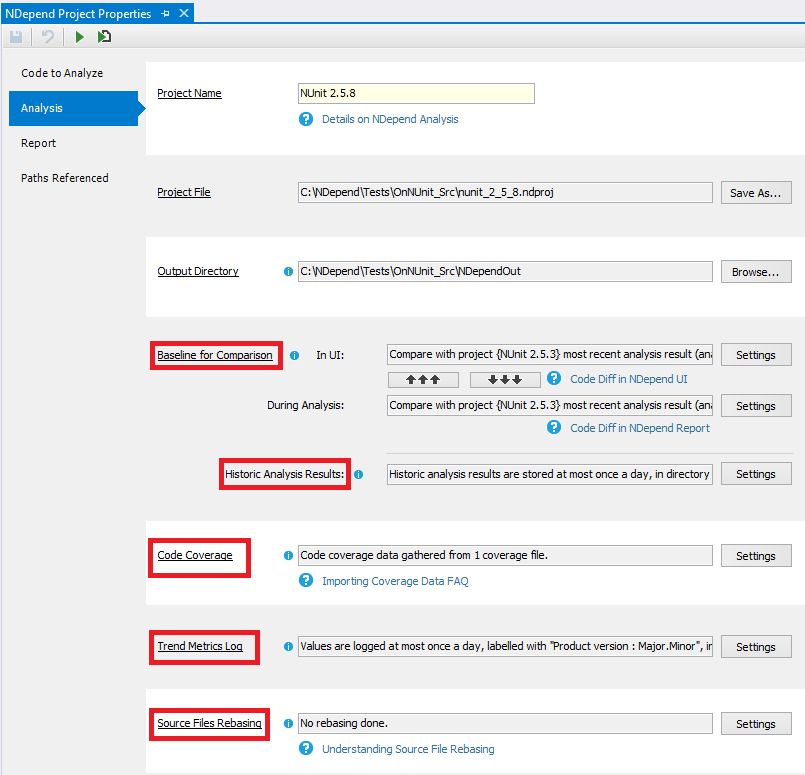 The Baseline for Comparison option lets define the previous analysis result on which to compare the current analysis performed (or the current analysis result loaded in interactive UI). This is useful if you’ve defined some CQLinq rules about evolution of your code base like for example, making sure that all new or refactored methods are 100% covered by tests (More information about this can be found here: Reporting Code Diff) :

Basically, here (m.WasAdded() || m.CodeWasChanged()) means was added or refactored compare to the baseline. The baseline for comparison can be:

Below, you'll find details to detect CQLinq result violations in the report.

The Trend Metrics Log option lets define the frequence of trend metrics log, and also the location where the are saved. More about this in the Trend Metrics Monitoring section.

The Code Coverage option lets specify the NCover, dotCover, OpenCover or VisualStudio XML coverage file(s) from which NDepend will gather test coverage statistics. More details about how to obtain these coverage files can be found in the NDepend documentation Coverage FAQ