Exploring the Code Architecture in Visual Studio through Dependency Graph

Depending on the size of the application the default application map is made of application assemblies, namespaces, types or members. The algorithm to chose the level of elements shown on map is simple: it attempts to have around 1.000 elements. 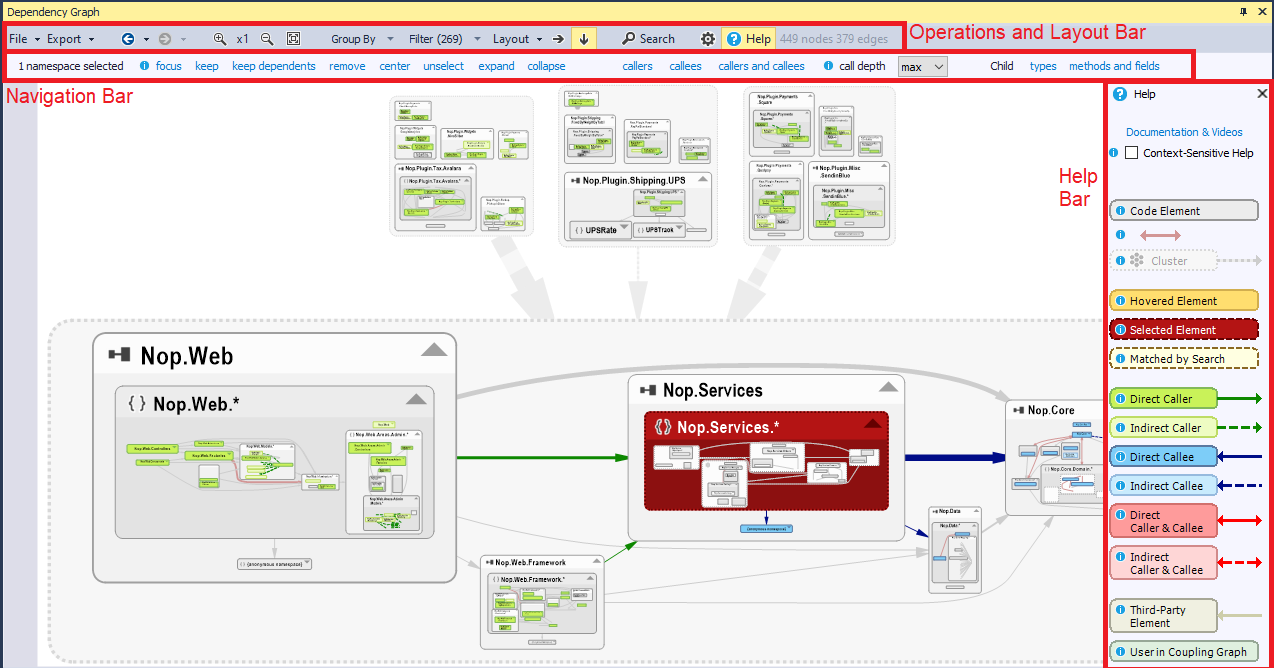 Search in the NDepend Dependency Graph

Search for elements by name on large graphs consisting of hundreds or thousands of elements in real-time.

Matched elements can be kept or removed.

A NDepend Search by Name panel is opened. It supports various search options and regex as well.

The short GIF below searches all namespaces whose names contain the string customer, selects them and then expands them to show all their children classes.

Files and Directories in the Visual Studio Solution Explorer can be dragged and dropped onto the graph.

Visualizing Large Graph Made of Thousands of Elements

The architecture of large applications can be explored and navigated live.

The short GIF below shows a graph made of 15,000+ classes of .NET Core 3 with a zoom on System.String and then System.Dictionary<K,V>.

This feature can be disabled from the Group-By options.

Visually cluster nodes have an hexagonal honeycomb icon and their borders are dotted. Edges between cluster nodes are also dotted.

Elements shown on graph can be grouped by:

So far 3 filters are proposed:

Per default only the Exclude third-party code elements filter is activated.

Note that the number in parenthesis near Filter counts the number of code elements actually filtered-out.

Elements of a graph can also be exported to the dependency matrix.

Click the images below to open some SVG vector graph in your browser. 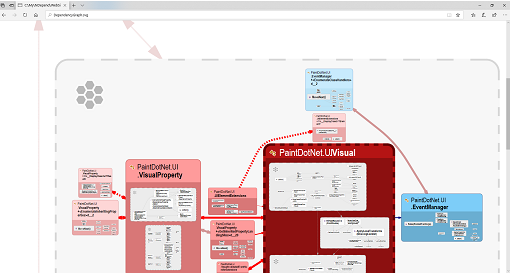 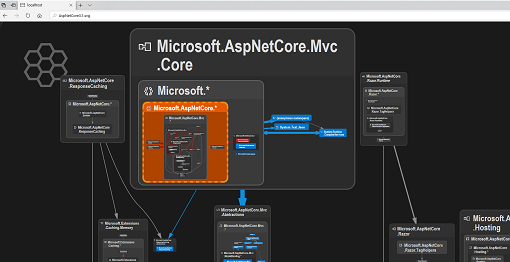 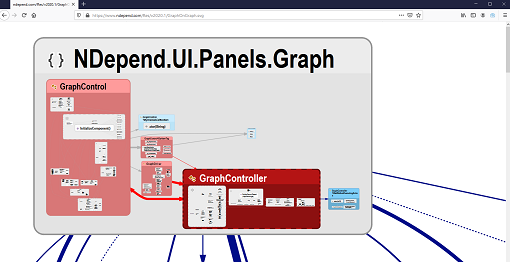 A graph can be persisted in a .ndgraph file and then restored.

.ndgraph files are referenced by the NDepend project.

Instead of saving a list of elements shown on graph, the list of actions that leads to the persisted graph is persisted. This way the graph remains in-sync with changes when the code changes.

If a pivot element is missing, like for example when attempting to restore an inheritance graph rooted on a base class removed or renamed, the load operation fails and a message is shown to the user explaining that a pivot element cannot be found by name.

There are two ways to generate a call graph:

In the background a code query is generated and can be edited through the edit code query link. 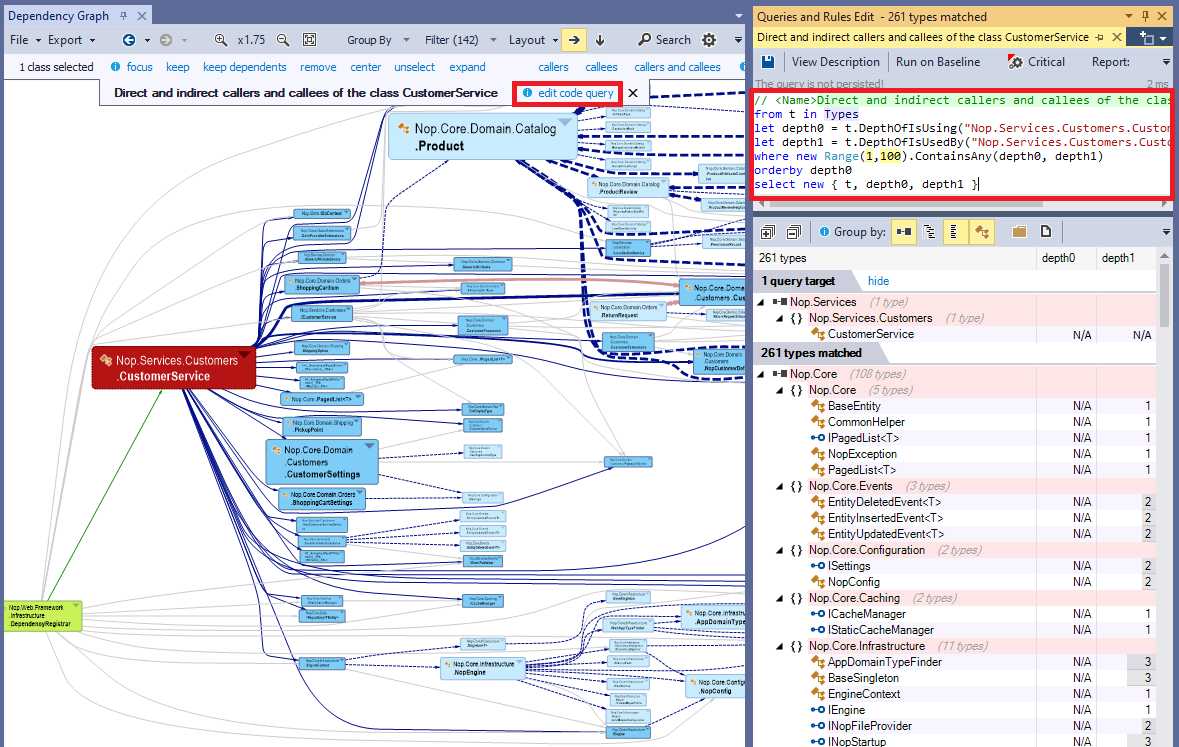 It is often needed to know the types and methods involved in the coupling between two assemblies or two namespaces. Especially when we want to anticipate the impact of a refactoring.

Any edge can be clicked in the NDepend dependency graph. The two elements are then selected and the links coupling graph and coupling matrix are shown in the navigation bar to explore the coupling.

Double-clicking an edge also generates the coupling graph between the two elements.

In the background a code query is generated and can be edited through the edit code query link. The result of the query shows in details who calls who.

When a baseline is available and no element is selected the navigation bar shows the changes map link.

Clicking this link opens the search by change panel that matches all code elements added or refactored since the baseline.

A new graph is then generated made of these code elements added or refactored since the baseline..

When no element is selected the navigation bar shows the cycles link.

From there you can export the elements that form a cycle to the graph. Below we can see a graph made of 30 entangled namespaces.

They form a large monolithic portion of code: all these namespaces depend on each other.

To dis-entangle such monolithic portion of code, it is advised to:

If you wish to dig into a path or a dependency cycle between 2 code elements, the first thing to do is to show the dependency matrix with the option Weight on Cells: Direct & indirect depth of use. 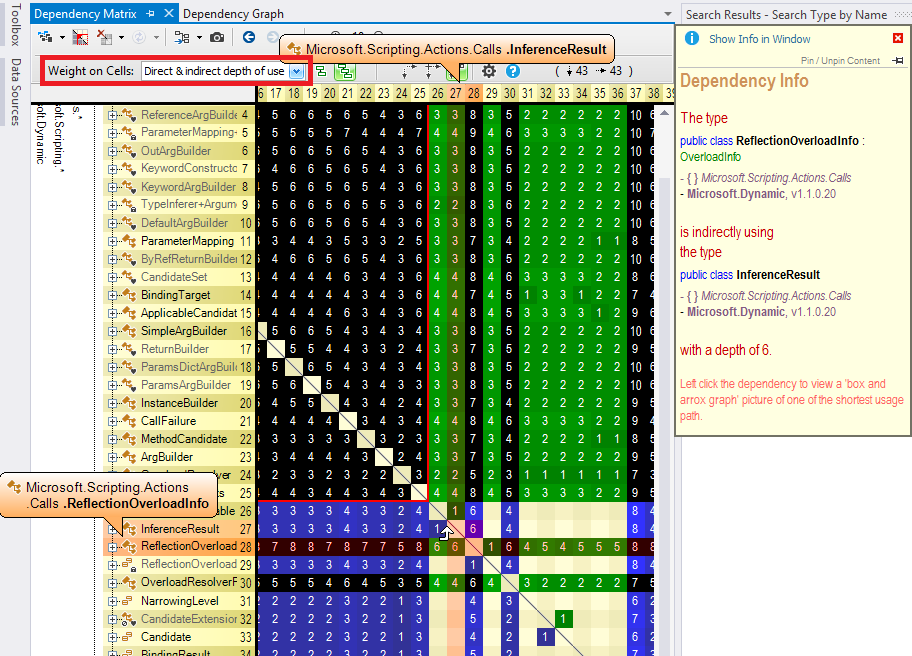 Just left clicking the cell shows the path graph below. 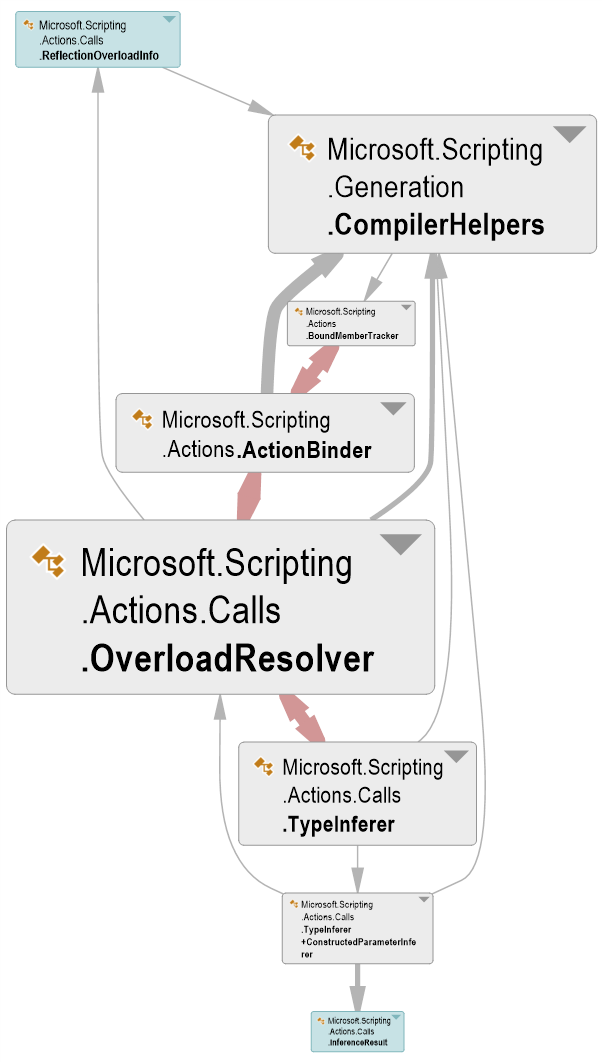 In certain situations, you'll need to know about all paths from a code element A to a code element B. For example, here, the Info panel tells us that there is a path of minimal length 2 between the 2 types involved. 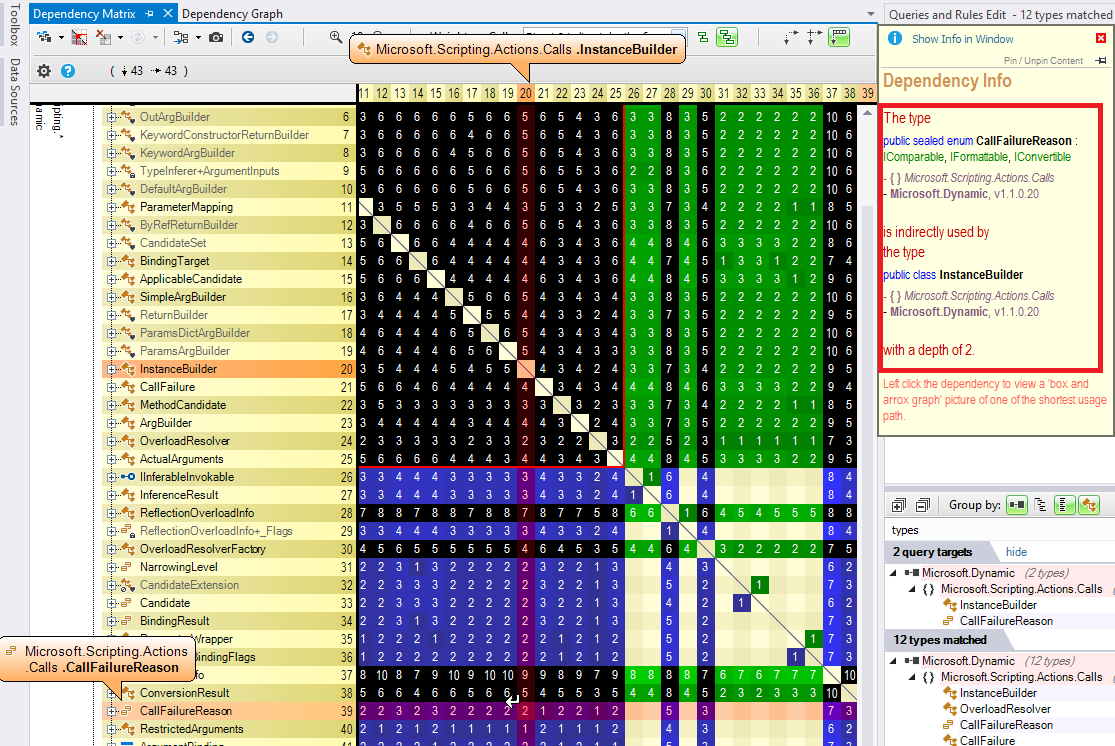 Right clicking the matrix's cell and selecting the option Edit a code query that matches paths generates the following CQLinq query that matchs all types involved in all paths from type A to type B. 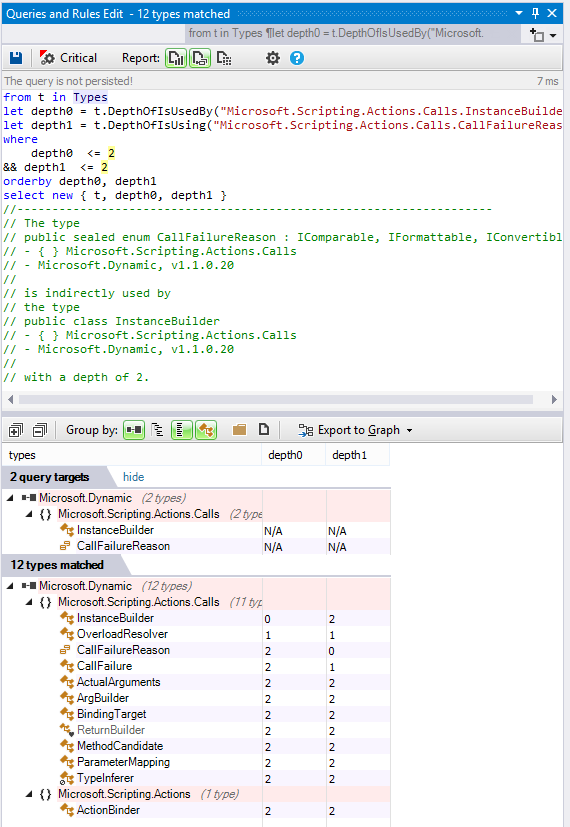 Finally exporting to the graph the 12 types matched by the CQLinq query, shows all paths from A to B. 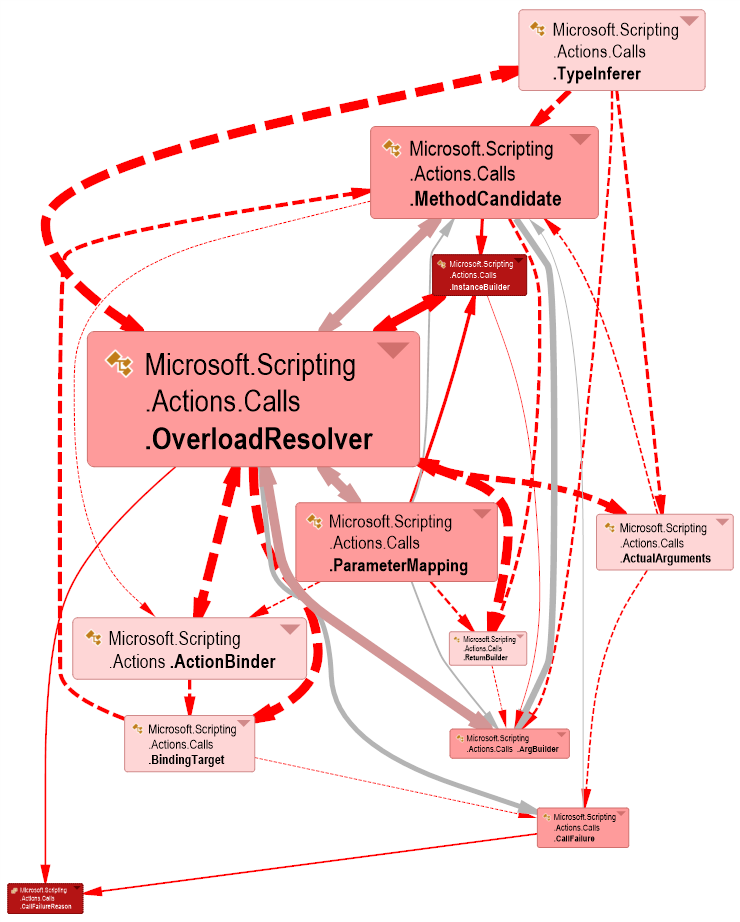 As we explained in the previous section, to deal with dependency cycle graphs, the first thing to do is to show the dependency matrix with the option Weight on Cells: Direct & indirect depth of use. Black cells then represent cycles.

For example, here, the Info panel tells us that there is a dependency cycle of minimal length 5 between the 2 types involved. 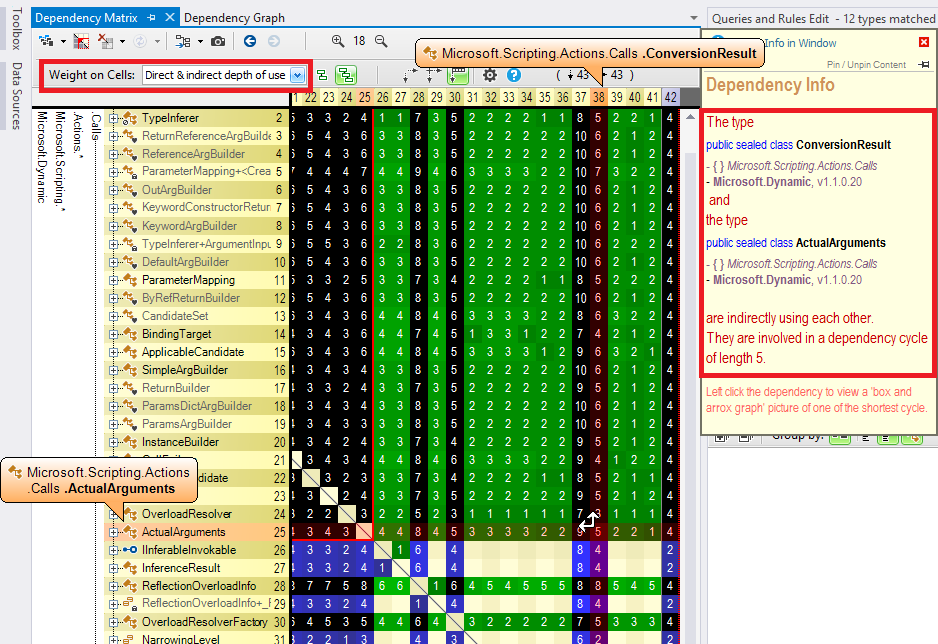 Just left clicking the cell shows the cycle graph below. 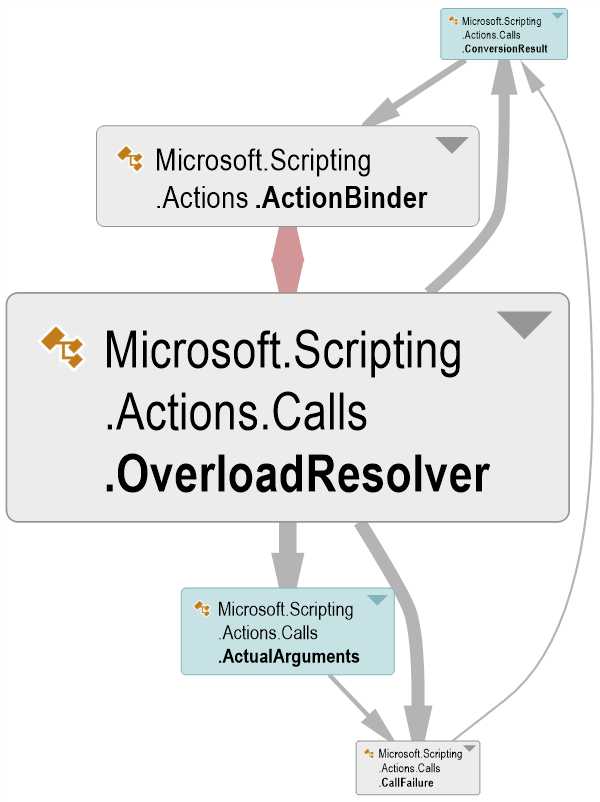 We can indeed follow a cycle from ActualArgument till ConversionResult.