Source files rebasing enables a common Build Process scenario where the code is compiled in one location and analyzed in another one. NDepend needs to access source files during various scenario:

The magic of PDB files

To understand the need for Source files rebasing, let’s remind some details about how the .NET debugger works with source code.

In the .NET world, when one wants to bind with source code from IL code, one relies on PDB files (Program Database Files). PDB files are built at compile-time by the C#/VB.NET or C++ compiler. There is one PDB file per .NET assembly. PDB files contain binary information about where concrete methods (i.e methods that contain code, as opposed to abstract methods) are declared in source file and which piece of IL code corresponds to which sequence point.

These source files’ paths contained in PDB represent essential information for the debugger. Indeed, the debugger relies on this info to bind source code with currently executed IL code. If you develop on several machines and thus move your source code from one machine to another, you might have stumble upon the following VisualStudio message that informs you that source file can’t be found based on the absolute file paths extracted from the PDB. You can then tell the debugger where the source file is and it will be smart enough to rebase further absolute source file path. 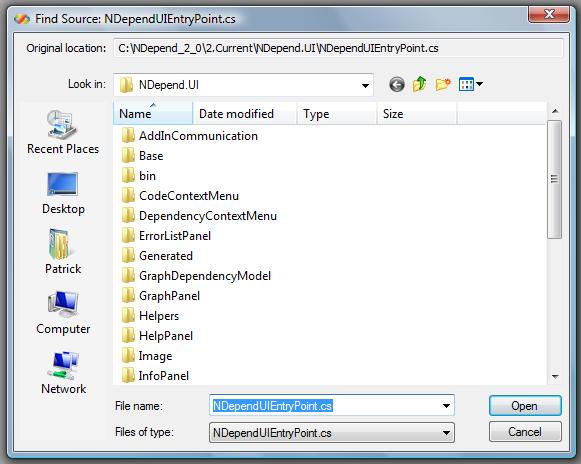 A variant is if a source file has been changed and the PDB files hasn’t been updated since (internally a hash code is used to make possible the synchronization check between source file content and PDB files’ sequence points).

Btw, as many others build process flaws, the fact that PDB files are not in-sync or source files can’t be found from PDB absolute source files paths are reported by the NDepend analysis. This feature is part of what is called Build Process health.

Basically the underlying problematic is the same with NDepend: source code might have been compiled in folder A and maybe the analysis occurs on a different machine, where the source files are in folder B. The absolute source files’ paths extracted from the PDB are not anymore relevant and NDepend needs to rebase them, from A to B. This is possible thanks to the following analysis option: 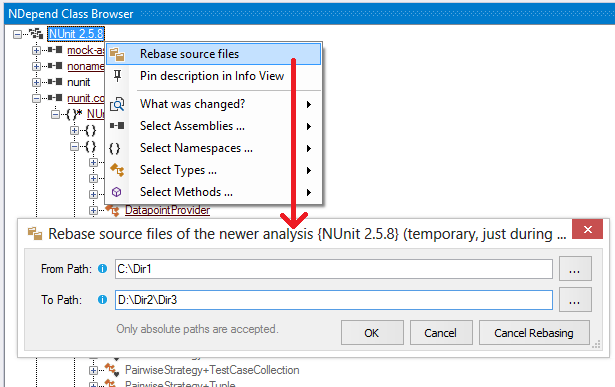 As in VisualStudio, NDepend interactive UI will be smart enough to ask the user if she wants to rebase a non-found source file and will apply rebasing delta for further source file declaration opening.

A solution to this problem is to fetch the older and the newer source files hierarchy from the source code repository and rebase both the older and newer application in intercative UI. This way, 2 versions of a source file can be compared properly.